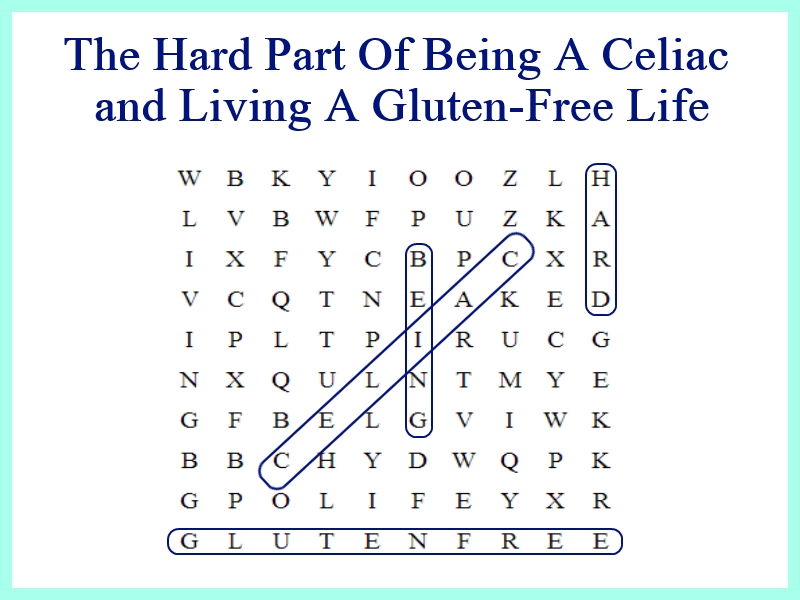 Last night my daughter Kelly had what I refer to as a "celiac breakdown". It's a point where the walls kind of come crashing in around you, and you realize because you're a celiac, you're different than everyone else and you can't do things everyone else may just take for granted. For my daughter, life can sometimes seem even more challenging because along with being celiac, she also can't eat dairy, corn, soy, nuts, eggs or yeast.

So we sat together and had a long talk about all the things that were troubling her. The interesting part was so many were related to her food intolerances.

Fitting Into Social Gathering with Celiacs

In some way we all want to fit in or be included and not miss out on things in life, especially not the fun things in life. But there's almost a type of isolation for those with celiacs and food allergies. Kind of like we're the odd man out, because we can't join into many of the same social activities others feel free to join and take part in that revolve around food. In fact, most social activities often do have food involved.
For the past couple of weeks, my daughter's been eating out at restaurants again with her friends, trying to fit in and be "normal" (her words). But as often happens, careful as she is, she got glutenized. And once again, we had the mean-spirited Gluten Kelly (click here to read more about how gluten can effect your mind and mood) living in our house for a few days this past week. Oh, she's such a bear when she's had gluten. (Made me think about and really feel for all those undiagnosed children out there with behavior issues that may simply be related to gluten.)
One thing we just found yesterday though, that might help my daughter a bit, is a gluten-free meeting site called Gluten-Free Singles. It's not just a dating site. It's also a way to meet friends who also follow a gluten-free way of life. The site just got started, so it's still in its infancy, but it may prove to be a great resource to Kelly in the future and allow her to meet others also following a gluten-free diet who will be understanding of dietary restrictions.

Being Invited to Dinner

Another concern we discussed was Kelly's eating over at a friend's house. And she brought up how difficult it can be to eat at someone else's house safely. Actually, often people are afraid to invite us over to their house for dinner. Why? They're afraid to cook for us. They're afraid they'll make us sick. And for the most part unless they're doing their homework and really understand celiac disease and following a gluten-free diet, unfortunately they're right and we probably will get sick. I wrote a post about it, "Cooking Gluten Free Meals for Guests".
It's hard because we want to come for the company, the laughter, the fun. That's what's important to us. And I had always thought we were the easiest people to have over. I tell people keep it plain and simple. Stick with whole foods and stay away from processed. That we're really not too hard to prepare a meal for when you think about it. But of course there's more to it than that. And it takes someone who will fully take the time to understand and educate themselves about safely preparing a gluten-free meal to actually make a meal that won't make us sick. But, understandably, not everyone wants to take the time to do that.
I grew up spending time at friends' houses and often ate meals there. I have some of the fondest memories of eating huge feasts over at my best friend Christine's house with her family. If I was celiac then, could I have done that? Probably not. This is one of the harder challenges our children with food intolerances are faced with, I think.

Sometimes Celiac Gets in the Way

Kelly just started working on the sustainable farm her dad manages. She loves it. She works in the farm market store and she's so happy about it. So happy. But the market also sells fresh doughnuts and pies. Can she be around all that gluten without being sick? Could she serve or make doughnuts and not get glutenized? We're not sure.
This is one of those times where I, as a parent, just cry a little inside. This is something I can't fix and I know that. And I'd hate to see my daughter stop doing something she loves because of celiac.

We Pick Ourselves Up and Carry On

Last night was a low point, no doubt. We have those along the way. I'm sure it happens to everyone dealing with celiac and food allergies and intolerances. But it's just a bump in the road, and we have to pick ourselves up and carry on. We're a family who believes in focusing on the positive things in our lives and we try not to dwell too long on the negatives and the things we don't want more of in our lives. We had our moment, that we did. Now it's time to carry on.

Get Your Copy on Amazon!
eBooks

Why I No Longer Use Xanthan Gum
Glad To Have “My Daughter” Back – How Gluten Affects The Mind
Glutenized - What To Do When You're Sick From Eating Gluten?
GMO Corn and Stomach Pains
The Hard Part of Being A Celiac and Living a Gluten-Free Life
Allergic Reaction To Mosquito Bites - The Secret To Stopping The Itch