Why I No Longer Use Xanthan Gum 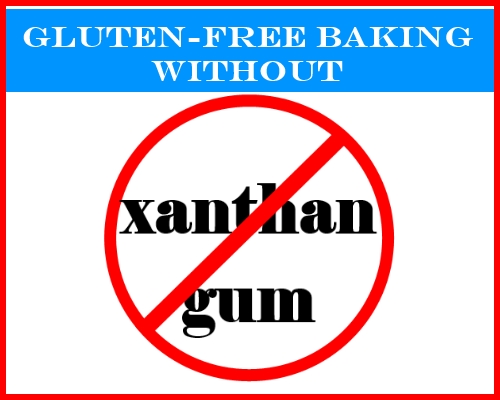 The gluten in wheat is elastic and expands when baked, allowing breads, cakes, cookies and dough to maintain their shape without falling or crumbling. However, since the flours used in gluten-free baking do not contain gluten, something must be added as a binder to create these same elastic qualities and help goods hold their shape.

When I first began cooking gluten free more than ten years ago, there were two main binders people generally used to replace wheat gluten in gluten-free goods. Xanthan gum and guar gum. In the beginning I used only xanthan gum, then I switched to guar gum for a while and then back to xanthan. Xanthan gum is a polysaccharide used as a binder in many gluten-free products.  In the production of xanthan gum, sucrose or glucose is fermented by a bacterium, Xanthomonas campestris.  Xanthan gum can be derived from corn, soy, or wheat.

Do You Have to Use Xanthan Gum When Cooking Gluten-Free?

In the last year I have stopped using any gums in my cooking. I don't use xanthan gum or guar gum when I cook any of the recipes in my cookbook, Celeste's Best Gluten-Free, Allergen-Free Recipes. Our diet is a fairly natural one and I didn’t feel these gums were something I wanted to be eating. I also felt my daughter was having a reaction to them. Some common reactions include migraines, skin itchiness, nose and throat irritation and gastrointestinal symptoms such as bloating, gas, and diarrhea.

Searching on the web I found many others were beginning to discover that these gums may be an issue for them, too. I began experimenting with different ingredients to replace these gums. I tried psyllium husk powder, which works quite well by the way. But for me personally, it caused a bit of stomach discomfort. I also tried fruit pectin.  Did not have much luck with that or gelatin for that matter. They did not produce the results I was after. Nor did I have much luck with agar-agar, inulin or acacia root. Then I tried konjac powder or glucomannan. This water soluble fiber is derived from the konjac gluco-mannan root plant. It's simply ground-up, dried konjac root. It is a dietary fiber that has been used in Asia for centuries. This fiber can be used as a gelling agent, thickener, emulsifier, stabilizer as well as a soluble fiber source.

Some of the believed benefits of konjac fiber include: regulation of lipid metabolism, reduced blood lipid and cholesterol; the reduction of blood glucose; reducing risk of constipation and cancer of lower digestive tract; and improvement of diet for diabetics.

Adding konjac glucomannan fiber to one’s diet slows the absorption of sugar and cholesterol from the digestive tract, helping to control sugar levels in diabetics and reducing cholesterol levels. Konjac powder proved to be the most successful in gluten-free cooking and baking. In most of my recipes in Celeste's Best Gluten-Free, Allergen-Free Recipes I was able to substitute the same amount of konjac powder in place of the xanthan gum.  A few recipes needed to be adjusted by adding slightly more konjac, usually an extra ¼ teaspoon per cup of flour.

Hi Celeste,
I just ordered your book from Amazon. I'm sure I'll enjoy it.
A quick question about substitutions like not using Xantham gum...Will you be sharing recipe changes as you alter your book's recipes?

First thanks for ordering my book. :) And absolutely - I've added a discussion to the forum titled, "Recipe Substitutions and Modifications". I no longer use xanthan gum in any of my recipes and only use konjac powder.

Thanks for your comment and please post to the forum if you make any changes to the recipes that might help others, too. Can't wait to hear what you think about the cookbook once you receive it!!!

I would like to start using konjac instead of gums and psyllium too. Do you recommend the same amounts when baking?

Yes, I use the same amounts in the recipes in my cookbook. I generally use 1/2 tsp - 3/4 tsp per cup of flour in all my recipes. Sometimes I found you needed 1/4 more konjac than xanthan. For bread recipes I use 1 tsp per cup of flour with not more than 1 tablespoon in any one recipe. Same was true with the the psyllium.

And does one do better at maintaining "stretchiness" than the other?

I tried agar agar and didn't have much success with it in my trials. Konjac works equally well in cold or hot temperatures. You can stir it into a protein drink or use it to thicken up a salad dressing like we just did the other night.

Since I didn't have much success with the agar agar I can't say how it does in regards to "stretchiness" but the photos of my bread can give you an idea of how the konjac does. I think it adds just the right amount of "stretch" to baked goods. Not too much, not too little.

Hope that helps answer your questions. :)

For a huge amount of alternatives, try TEXTURE: A hydrocolloid recipe collection, v3.0. It's a click-to-download-for-free pdf on its own main site, and it's got a wealth of info on different gums/gels/etc. It mentioned that combining both xanthan and konjac makes a really, really, really, thick gel. Check and see what other "stretchy" substances you can find.

Get Your Copy on Amazon!
eBooks

Why I No Longer Use Xanthan Gum
Glad To Have “My Daughter” Back – How Gluten Affects The Mind
Glutenized - What To Do When You're Sick From Eating Gluten?
GMO Corn and Stomach Pains
The Hard Part of Being A Celiac and Living a Gluten-Free Life
Allergic Reaction To Mosquito Bites - The Secret To Stopping The Itch